Why You Should Visit Stunning Paphos Cyprus 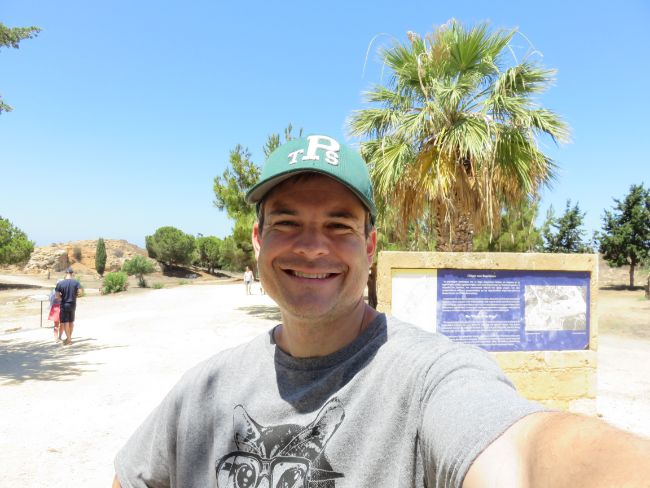 Roman Abramovich. He’s all that was missing from here in beautiful Paphos, Cyprus. Toss in a Russian oligarch or 2 and you’d have a full and proper Mediterranean playground for the well-heeled in this peaceful, glam, drop dead gorgeous beach town in western Cyprus.

From the eats, to the yachts, to the castle, the hallowed antiquity of 2 heritage sites and the crystal clear, jaw-dropping, refreshing waters, Paphos checks all boxes on the Blogging From Paradise board.

Kelli and I are wrapping up our trip shortly so it’s time to share why I feel you should visit Paphos.

I can’t stop using this word. I’ve seen guys speaking in pleasant British accents using the phrase “hallowed antiquity” repeatedly in movies. Movies depicting Romans, or Greeks, or whatever. Anyway, after visiting the Paphos Archaeological Site and Tomb of the Kings I assure ya the place is well worth the trip.

I stepped back hundreds to thousands of years after dropping a few Euros to enjoy each heritage site. Picture an enchanting, postcard-perfect backdrop of the Mediterranean Sea as you learn about how Paphos looked before KFC and McDonald’s dotted the main drag in town. Still trying to discern whether tomb builders sloppily worked over chicken drumsticks while on the job (No; KFC was not part of hallowed antiquity). Anyway, I may have sweated like Patrick Ewing when he stepped to the free throw line (Youtube it) in each park but I loved the places.

Note; Paphos Harbor has no real beach. No sand. Limited areas for laying out. One climbs down a ladder to enter the refreshing, crystal clear waters of the Mediterranean Sea. I was delightfully refreshed, invigorated and recharged by the kinda cool but supremely pleasant waters.

The water drops off immediately in some spots but during high season it’s bath calm. No waves in Paphos Harbor. Meaning, super safe.

Kelli and I ate ice cream by a castle moat here. A smallish castle. OK, twas a fort. Once a salt house. Hell, 342 different peoples used it 423 different ways. As is usually the case for this oft-conquered little island not too far from the Middle East.

Castles. Yachts. Clear waters shore side. Deep blue sea on the horizon. Beautiful restaurants. Palm trees. Tastefully done. The designers did their homework. Nothing sticks out like a sore thumb in Paphos. Save the woefully tall KFC sign one spots from the Tomb of the Kings. Even then, there’s something reassuring about seeing the Colonel’s grille while enjoying hallowed antiquity (there goes that phrase again).

Greek foody freaks would love it. British pensioners have their choice of spots offering 3 to 4 Euro full English breakfasts. I even feasted on bangers, fried bread, marmalade and back bacon at Tea for Two (sausage, fried bread, jam and smoked ham for my American readers).

We had fabulous Chinese in town too at that Imperial Chinese joint. Reminded me of the restaurant in Indiana Jones and the Temple of Doom. Similar motif. One can grab whatever they want in Paphos: traditional Cyprus Meze, Greek, Italian, Thai, Chinese, British fare, whatever. Western too, you fast food junkies.

Visit the place. Paphos, Cyprus is a wonderful little slice of paradise in the Mediterranean.