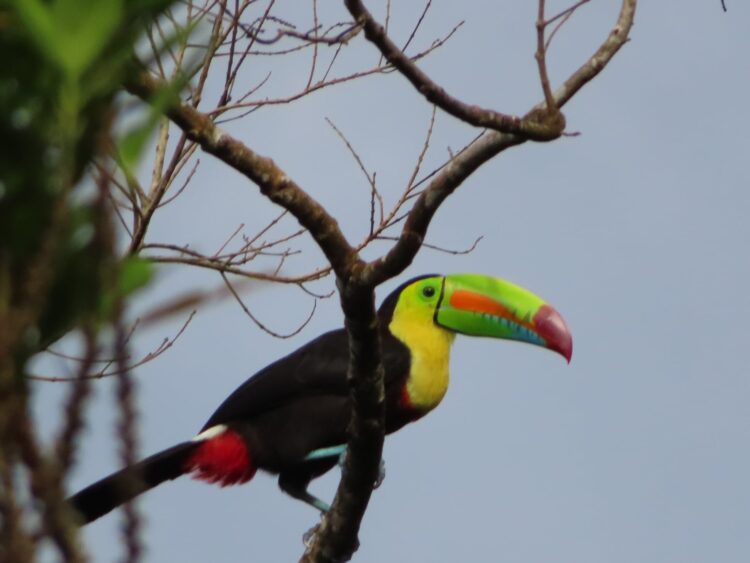 During my trip to El Valle de Anton in Panama I regularly spotted keel-billed toucans on the property.

El Valle de Anton is a world-renowned birding spot for its 300 plus species of birds, including keel-billed toucans, its small cousin, the collared aracari, oropendola, hummingbirds, honeycreepers, tanagers, flycatchers and the vocal, gregarious chachalaca. Small songbirds genuinely feel like a dime a dozen type creatures in these parts. I counted no less than 5-10 or more species any time I took a short, 15 minute walk from the cloud forest into the center of town.

This toucan alighted on a dead tree beside the house quite routinely. But on this day he decided to stick around to issue his thrumming call, primping and preening in the process. I heard the call 5-10 times or more daily in the area beside the house, the toucan emitting a frog-like, clear sound easily identified. Morning, afternoon and early evening, toucan calls dominate fellow bird calls in this region of El Valle. The landscaper noted how the circumference around the house is basically El Calle de Toucans, or The Road of Toucans. Whether these birds nest or simply congregate in this area I do not know, but these guys spent ample time on and around the property. 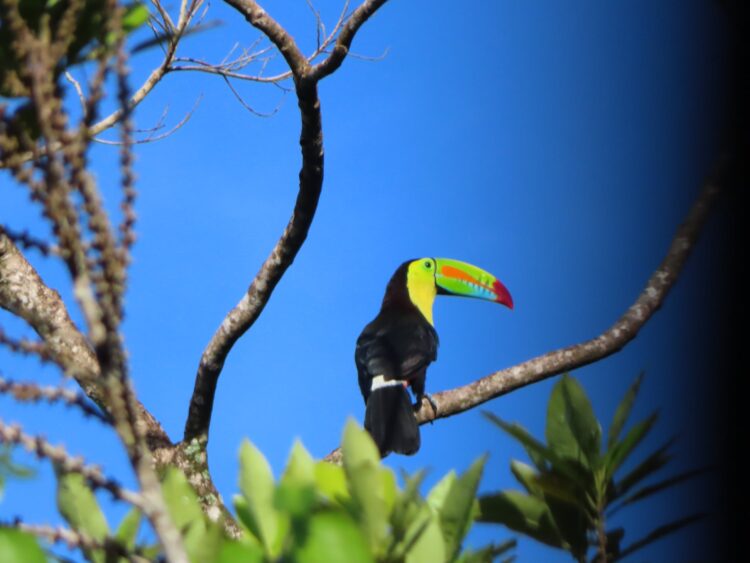 Toucans are known around the world for their gaudy beaks and overall ostentatious garb. The multi-colored, grossly-oversized beak appears bigger than almost all song birds on the property. Note the striations traveling north and south on his impressive gear. He boasts a bright yellow bib, jet-black body plumage and a red tail often spotted as he shakes and shimmies his tail feathers.

I saw 4 keel-billed toucans this day before all fled the scene, save this individual. After releasing a series of thrummings – and droppings – he coasted to a tree within the cloud forest.

El Valle de Anton is one of the largest inhabited areas on earth that sites entirely within the caldera of an extinct volcano. Birders and hikers cherish this slow-paced town for its pristine nature. Panama City residents intent on fleeing the heat and humidity of that literal urban jungle visit El Valle for his pleasant climate, stunning views and friendly locals. Many well-heeled residents of Panama City own weekend homes in El Valle de Anton, a short 2 and a half hour drive from the capital. Estates spanning many acres seem to be the norm in various areas of town.

Toucans are large tropical birds which consume fruits, nuts, small lizards and the occasional avian hatching. Most toucans I saw around town seemed to be dogged by smaller birds constantly divebombing the unwelcome intruder, escorting him out of the canopy. The keel-billed toucan would make a beeline to the next substantial-sized tree, being led by its flashy beak, cruising across the valley.

Kelli and I spotted toucan during our trip to the jungles of Bribri, Costa Rica.

The species I snapped in the canopy was a choco toucan, a dazzling species, albeit a little less flashy than the keel-billed variety. Even though I spent 6 weeks deep in remote jungle during this trip I saw far more toucans – and birds in general – in El Valle de Anton. Panama is home to nearly 1000 of the 6000 bird species on earth. Any small nation showing off 1/6th of the world’s bird species flashes serious biodiversity in terms of las aves.