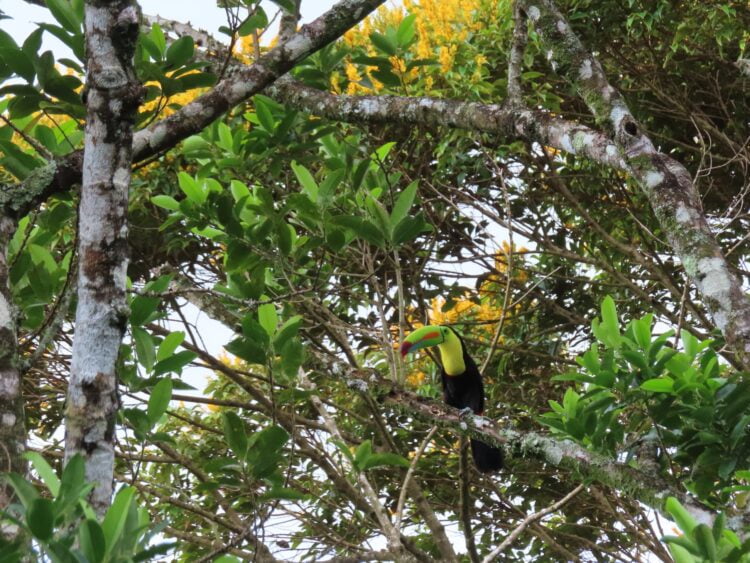 Apparently, the keel-billed toucans have a sense of humor here in El Valle de Anton.

I finished this blog post, published it, shared it on social media then exhaled, looking out from the living room window for a break. Literally 2 seconds into the break this toucan in the image above alighted on a branch, all but saying:

Kelli grabbed the camera and I sprinted into the yard to snap the above shot.

He also posed in the backyard a few days later. 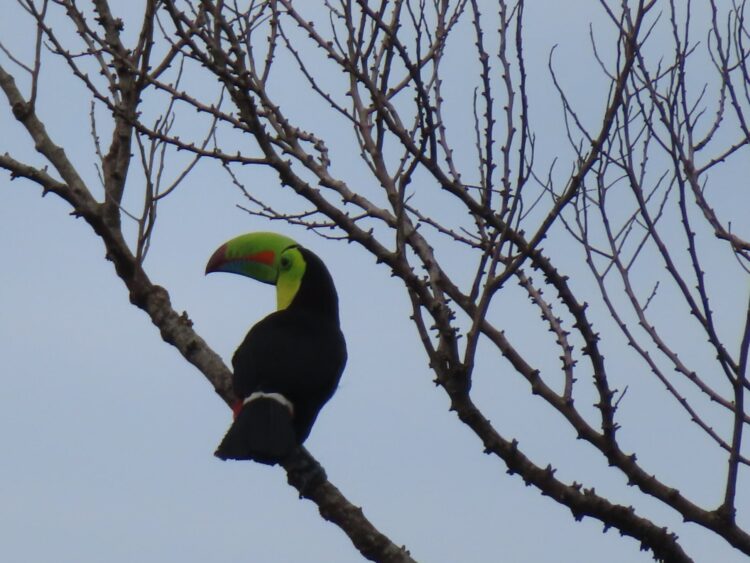 He was being dogged by small songbirds; toucans can and do predate the young of smaller birds. 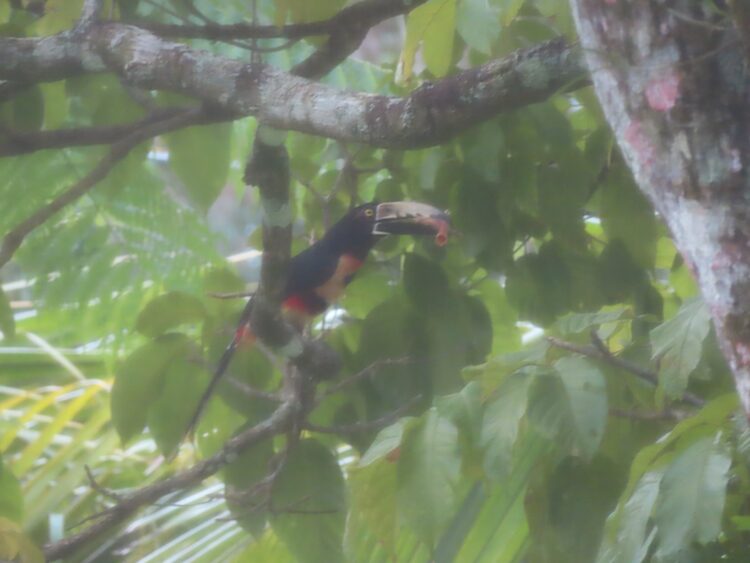 His cousin stopped by too; a small toucan species called the collared aracari. 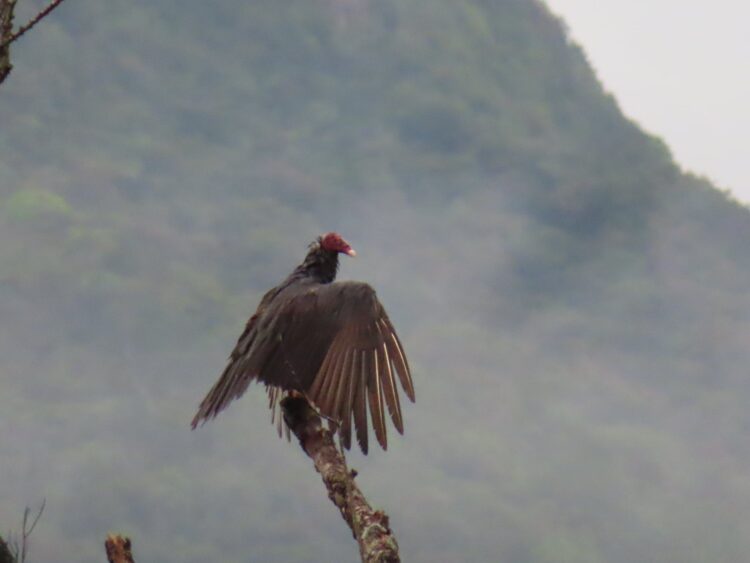 This town is one of the few human habitations sitting entirely within the crater of an extinct volcano.

Wildlife is abundant. Kelli and I snapped each of these images within a 5 day stretch of limited time spent outdoors. We see 10 to 15 different species of bird anytime we walk into town. Birders flock to El Valle de Anton from around the globe to record the 300 plus species in the valley.

I snapped a few photos of these dazzling creatures. 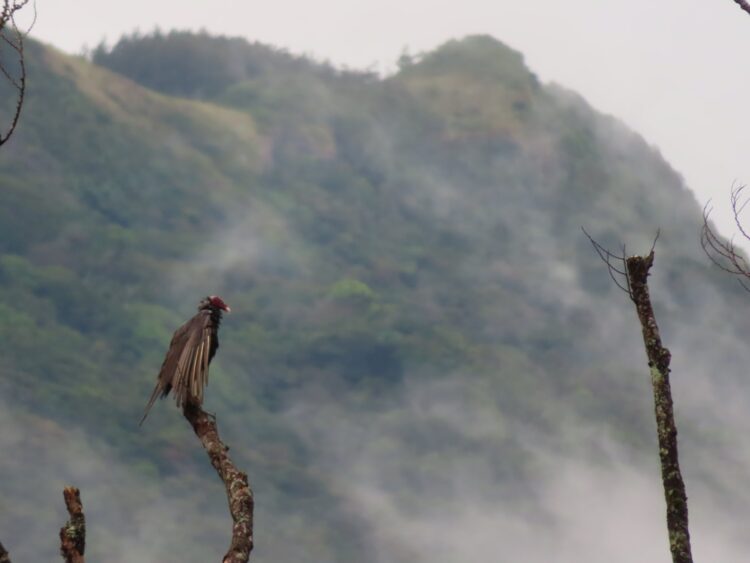 Turkey vultures are a fixture all throughout Panama. I’ve seen them in Panama City, Pedasi and driving all around the central part of the country. He landed the moment I began toying around with the zoom on our new camera. What a handsome subject! 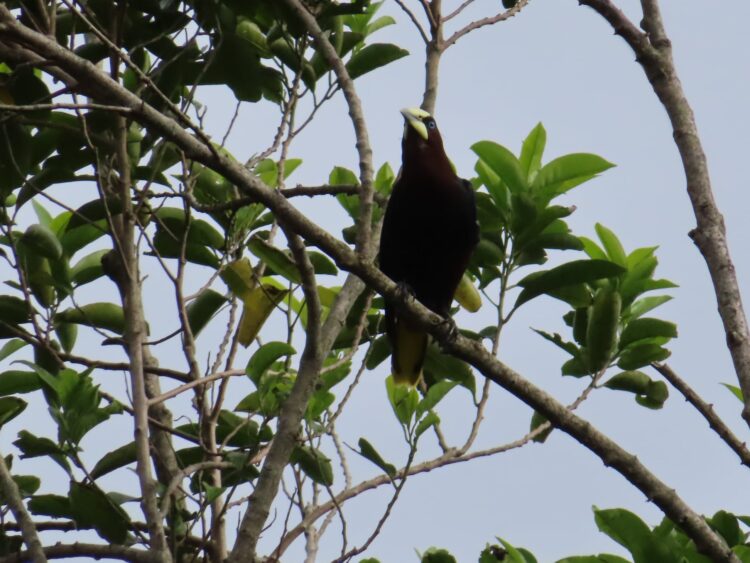 A flock of oropendola flew through the property. Each proved to be a difficult subject, rapidly hopping to and fro from branch to branch. 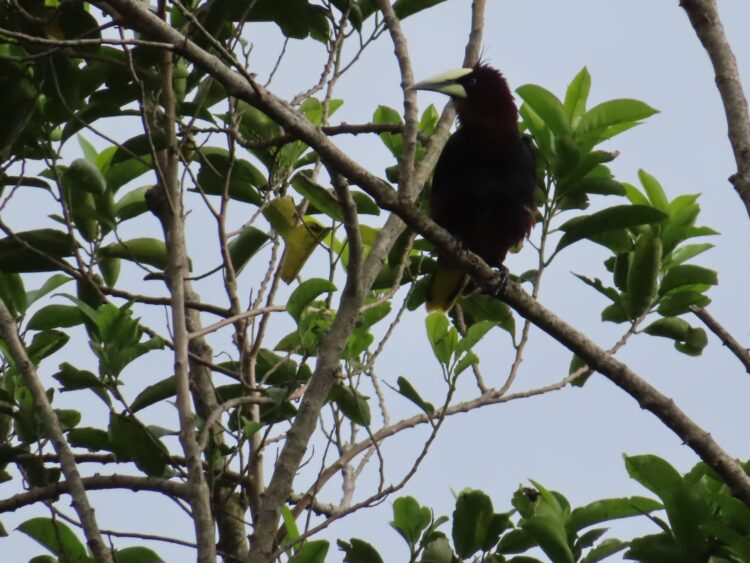 Another snap of this handsome guy. Note the blue eyes. 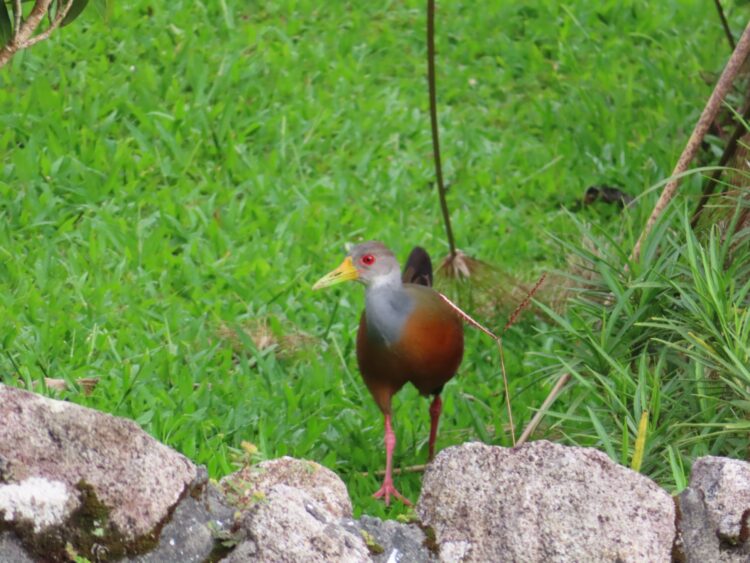 I simply call him hot legs for those hot pink, long sticks. But ornithologists call him a Gray-necked wood-rail, a terrestrial bird often spied foraging in the yard. 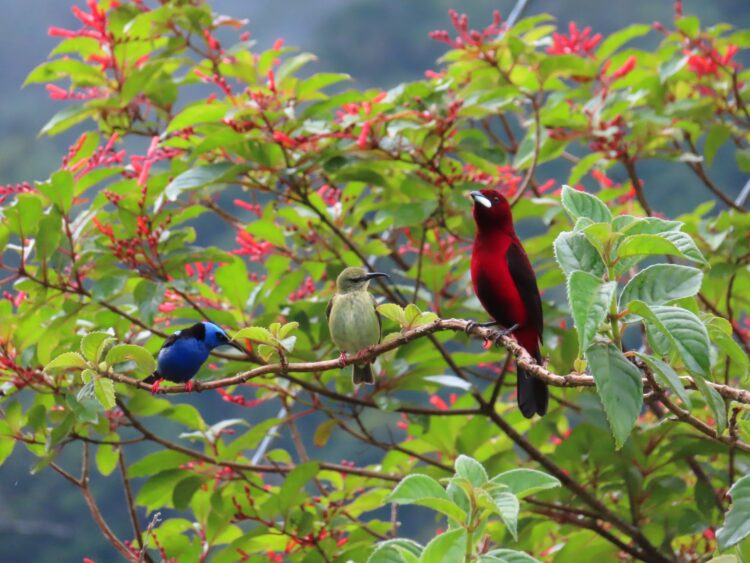 The 3 Amigos de Anton sat on the branch 10 feet from me, all but goading me to snap the shot, waiting for the picture perfect photograph. 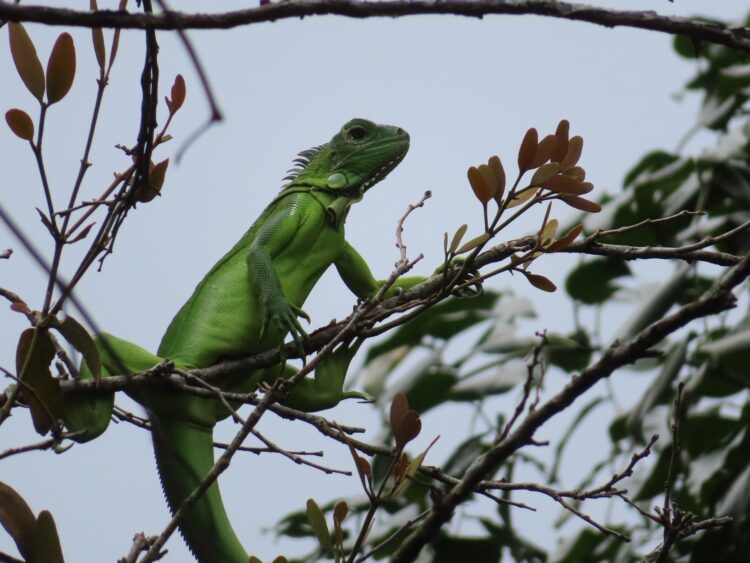 I spotted this green iguana high in the forest canopy.

Blue-gray tanagers seem to be a semi-dominant species here. I see them all over town quite frequently. He alighted on the tree beside me for the snap. A pair also dive-bombed the ripe bananas I place in the backyard. 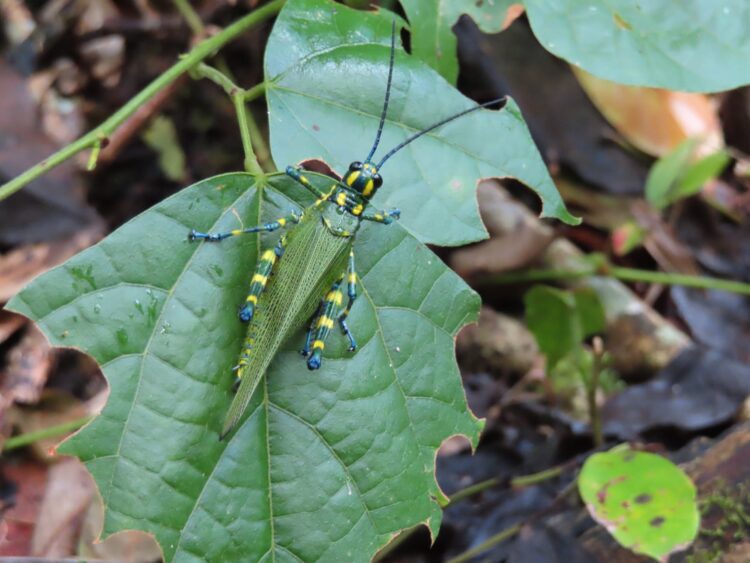 This blue and gold grasshopper greeted us on our first hike through the forest. Note how his wings perfectly mimic leaves. The moment he flew he appeared to have a set of leaves by his sides. Mimicry allows prey species to evade or avoid predators intent on downing a tasty morsel. 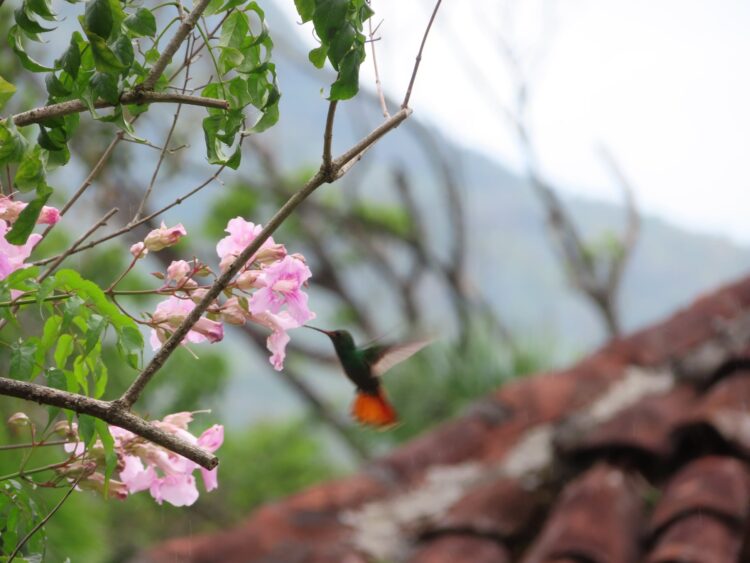 Hummingbirds are a dime a dozen in El Valle de Anton. This chap took a swig from one of the hundreds of flowers on the property. Note the long proboscis. Hummingbirds mine nectar to energize their tiny bodies and seemingly supernatural level of metabolism.

I heard a few buzz by my head during hikes through the forest, the wings sounding like a small helicopter. We also saw oodles of these guys during our house sit in the jungles of Costa Rica.

Euphonia seem to be another dominant species; I spy these guys all over town. He and his mate seemed to take an interest in the fruit I placed on the grate. Bold and curious, he alighted not 5 feet from me as I snapped this shot. 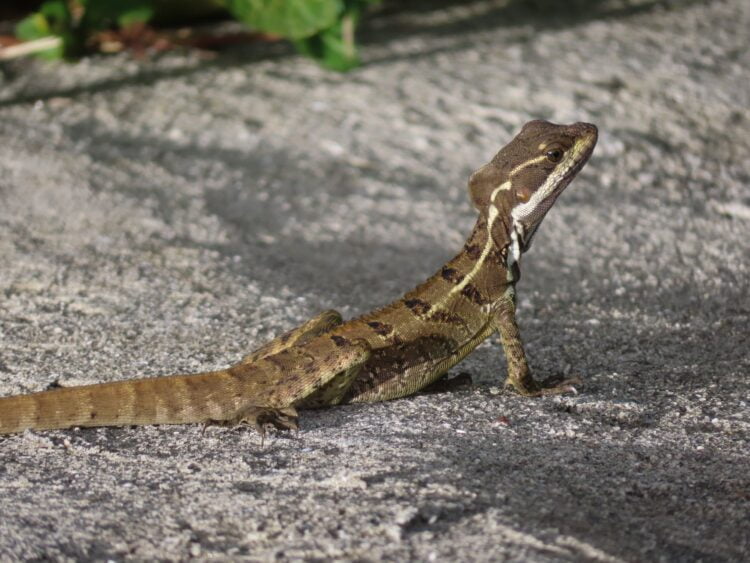 The Jesus Christ lizard – also known as the basilisk – is a primitive-looking lizard able to run on water. I have seen one do this in person during one of our trips to Costa Rica. The lizard generates enough speed and weighs light enough to literally skim the water to evade predators.

Flycatchers are common aves in El Valle de Anton. These guys enjoy sitting on power lines before engaging in an aerial display to catch insects. One cannot miss the bright shade of yellow radiating from the breast.

This bird alighted on a dead tree in the backyard. Scrambling for the birding guide, I took him for a Central American turkey in some regards. The gray-headed chachalaca has a cool name and even cooler demeanor, sticking around for a few minutes before flying into the forest.

I did not attempt to identify this species of hawk because too many potential species look similar. We did locate his territory however because we have seen him in the same spot right before we enter the jungle on our Cerra Gaital hikes.