Every house sit we worked involved caring for pets.

Kelli and I currently house sit on the beach in El Limon, Panama, in the Pedasi region. We love this sit. Caring for 3 dogs beside the Pacific Ocean makes for a dreamy trip.

Most days pass without incident. But Kelli and I frame sitting in this fashion because we developed an enlightened aspect of house sitting in rural areas.

Virgin sitters – or pet owners who never lived in rural areas – likely feel a rural sit to be:

because until you master the art of surrender while house sitting in rural spots you are screwed. 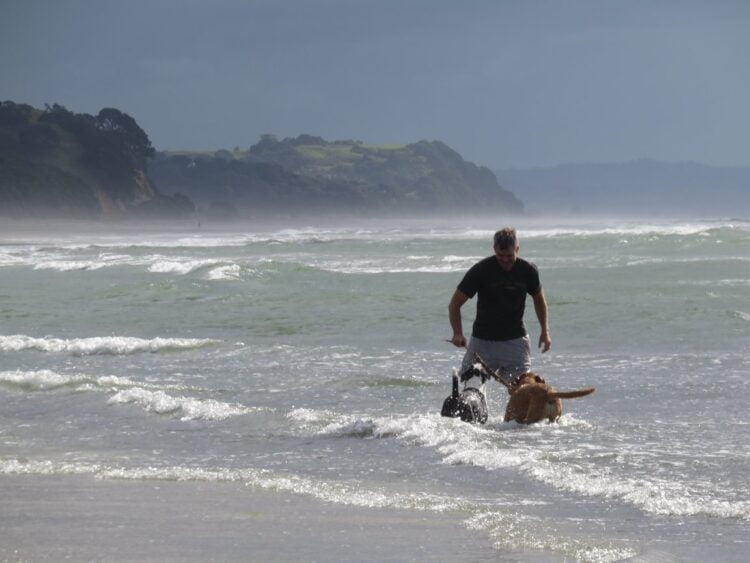 The enlightened aspect of house sitting in rural areas: surrendering.

Surrendering means completely trusting in the fact that you can control a little bit and need to peacefully let go all else. In theory this sounds great. But what happens when the dogs or cats encounter deadly predators, fight local cats or dogs or traipse about speeding cars on rural roads? Surrendering sounds not peaceful then, does it?

In truth, surrendering much control to trust:

I wrote this post after allowing the dogs to sprint to the beach; they barked harmlessly at someone’s pet. People love dogs in this region of Panama. Folks bring pets in tow to the beach. For whatever reason, some dogs annoy our pet sitting dogs to the point where Las Tres Mascotas Locas sprint 70 meters to the beach to bark at said dogs. 70 meters is out of my eyesight. What can I do?

Surrendering to the fact that our 3 doggies bark protectively for a few moments then return to the house felt highly uncomfortable – and flat out scary – when the dogs did this in response to a 120 pound, aggressive male Rhodesian Ridgeback waiting for them on the beach. He had nearly killed other local dogs; he has not been neutered and received little social training. But sitting with my deep fears and allowing the dogs to sniff and work things out developed greater trust in the dogs and in surrendering.

The list goes on and on. Kelli and I house sat in rural Bali, with venomous snakes. We also did sits in spots where pets seemed to be abused if vanishing from our watchful eyes.

Guys; we grew up in New Jersey. Everyone walks their pet on a leash. Cats live house-bound. Surrendering in such settings is almost non-existent due to deep fear-based, Western control mechanisms designed to keep people and pets comfortable, safe and resistant to fear. However, the split second we began sitting in rural areas we developed the skill of surrendering, letting go, trusting and feeling at peace with caring for pets because:

You will never be able to house sit in rural areas like us if fear dominates your mind concerning pets solely because facing, feeling and releasing fears is step one to follow to trust walking dogs off leash, to feel at peace allowing cats to roam at day (or night) and to understand how most locals and expats in rural areas love their pets to the point of granting freedom and roaming happiness to their furry kids, fully understanding how said freedom increases injuries and incidences of death, sometimes.

I never believed I could walk a dog off leash in a remote jungle but did so outside of Bribri, Costa Rica. We cared for an 80 Rhodesian Ridgeback who handled herself nicely. Ridgebacks were bred to hunt lions. Anyway, even a tough Ridgeback triggered uncomfortable feelings in me for all manner of venomous snakes and insects slithering and crawling around the jungle. She charged into deep vegetation routinely; what could I do? Surrender, trust and feel at peace with both her instinct and the instincts of local fauna, engineered to only strike out in the most dire circumstances.

Pets dying in rural areas are extremely rare events for house sitters. Full time rural pet owner residents do suffer through the death of furry kids more often simply because living among large predators and venomous creatures increases the chance of fatal encounters. But house sitters switching locations rarely experience the death of a pet due to some rural influence.

One dog we care for here in Panama got stuck by 10 quills from a porcupine. Each dog walked by a venomous cane toad. Toss in encounters with the Ridgeback, barking sprints to the beach out of my sight and various other events, and we received circumstances to hone our surrendering skills.

Develop peace of mind as a house sitter.

Take on rural jobs brimming with pristine natural beauty, friendly locals and a general sense of peace and calm.